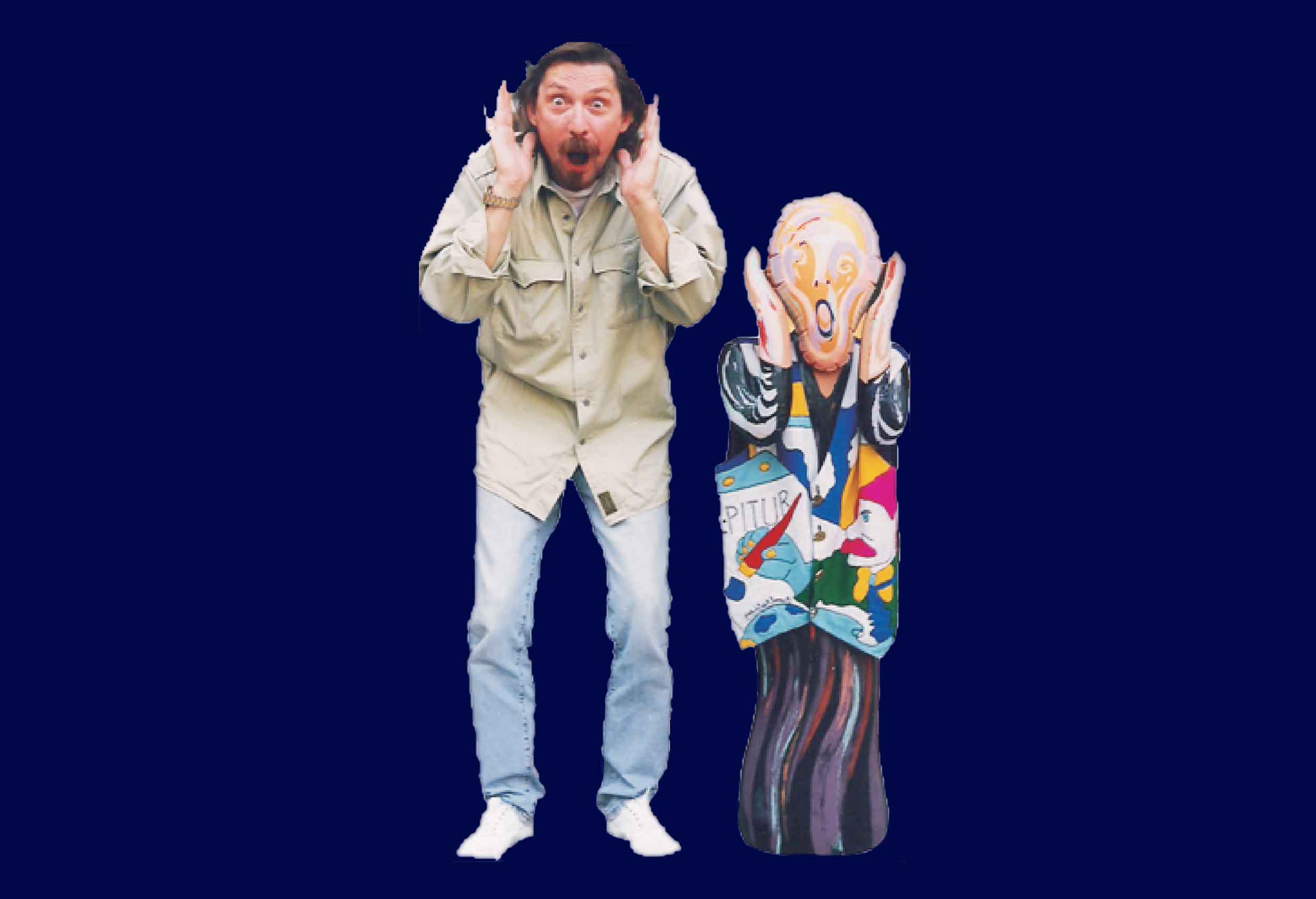 Giampaolo Belotti, painter, sculptor and free thinker.He was born in Rovato (Bs), Italy, on May 23rd, 1954.

Very smart and curious since he was very young, his talent shapes at F. Ricchino Drawing School in Rovato – managed by the master Marte Morselli – and strengthens while studying at the Arts Gymnasium in Bergamo, when he is going to identify the art of caricature as his highest creative vocation.

He graduates at the Arts High School in Bergamo and becomes a skillful caricaturist, taking part in solo and collective exhibitions both in Italy and abroad.

Between 1979 and 1981 he teaches drawing at Ricchino School in Rovato and continues feeding his passion towards artwork.
In 1985 he publishes L’apertura, a funny book of cartoons inspired to a bee, that is not only an insect, but becomes a metaphor for shrewd meanings.

In 1989 he takes part in the first Biennal in Franciacorta and few months later, during spring and summer 1990, he illustrates two books, one of poems and one of funny short stories edited by the Publishing House Apeiron (BS),

In May 1990 he is invited to the first exhibition entitled Torino Fax Art curated by the famous art critic Vittorio Sgarbi and at Christmas he exposes at the first exhibition of Sacred Art Se Cristo tornasse – If Christ came back –, set up in Padoviniana in Brescia.
In 1992 he presents a solo exhibit at Club Europa 92, in Modena, chaired by the master Luciano Pavarotti. One year later he exposes at the International Exhibition of Humour, in Bordighera, and draws a wall painting about the history of Founding Fathers in the apse of the lower chapel of Convento dell’Annunciata – a cloister built in the 15th century and situated on Monte Orfano, the oldest mountain of Franciacorta.

In 1994 he takes part in the Collective Exhibit at Pavarotti International, in Modena, and exposes at the International Exhibition of Humour in Bordighera.

In 1995 he is still participating at the Collective Exhibit in Modena and drawing the official postcard of “Pavarotti International”.
In the same year he is involved in Cent’anni con la testa tra le nuvole – A hundred years with head in the clouds, a collective exhibit supported by the town of Rovato and its Public Library in order to celebrate the centenary of the comics – and in Artessenza, The essence of art – a performance of artists working through the streets of Brescia.

Between 1996 and 1997 he draws three official postcards of Pavarotti International, two of them during the concert The Three Tenors, held in Modena.

In 1998 he draws a wall painting in the dining hall at Cadeo nursing home in Chiari, near Brescia.

In 2000 he has a solo exhibit at Pavarotti International 2000 and draws three official postcards both for this and also for the following year.

From 1994 he draws exclusive paintings, caricatures and various works of art.

One of a kind is the caricature on large format bottles commissioned by wine cellars in Franciacorta or other well-known vineyards, by private citizens, public authorities or companies. The topics consist of celebrities, married couples, a group of friends or simply anyone who would like to keep a moment live through the work of art. As John Keats said, “a thing of beauty is a joy forever”.

From 2000 to 2004 he draws large format bottles to famous football Italian federation of serie A – Italy’s most prestigious soccer league – like Roma, Chievo, Brescia and Juventus.
In 2003 he illustrates the 25th chapter of The Adventures of Pinocchio written by Carlo Collodi and published by Associazione Amici del Teatro Minimo.

In 2004 he has a solo exhibition titled I sogni dell’anima – Dreams of the soul – at San Marino Hotel supported by the town of Darfo Boario Terme.

2005 is a very prolific year: he draws the painting Improvvisa apparizione di Arlecchino sulla piazza di Rovato – A sudden apparition of Harlequin in the square of Rovato – for the book cover Le maschere della commedia dell’arte – The masks of Comedy of Art – published by Associazione Amici del Teatro Minimo; he illustrates the recipe book Stefano Cerveni, one star Michelin chef at Due Colombe Restaurant in Rovato; he also takes part in the exhibit of past and contemporary caricaturists titled: Pennini Graffianti – Scratching nibs – in Castello Oldofredi at Iseo dockyard and rooms, supported by the city of Brescia.

In 2006 he takes part in the collective exhibit Pennini Graffianti e non – Not just scratching nibs –, at Martinengo Palace, located in Brescia.

In 2007 he takes part in the collective exhibit at the Collective Town Gallery in Clusane (Bs) and in Pennini Graffianti e non – Not just scratching nibs –, in San Felice del Benaco, on the western shore of Lake Garda.

In 2008 he has a solo exhibit Anthologa at Casa Form in Coccaglio (Bs) and takes part in the collective exhibit Pennini Graffianti – Scratching nibs – at the UCAI Gallery in Brescia.

2009 highlights the participation in many collective exhibitions: in Bari, Padova, Reggio Calabria and Roma; he also adheres to the collective Jazz at Iseo Dockyard Museum, to Pennini Graffianti – Scratching nibs – at the Cicogna-Rampana Foundation in Palazzolo sull’Oglio (BS) and in Marone, an exhibit he is taking part in the following year both in Marone and in Esine.

In 2010 he draws large format bottles commissioned to F.C. Inter during the victory of Champions League 2010.

In 2019 imagination, technique and realty meet a new project: Apparenze – Appearance. Things and real people are not immediately recognizable, but their identity becomes clear as soon as light enters the shape, projecting its shadow on a plane surface, like a wall, and returning its authentic meaning. This project corresponds to the research of the fourth dimension.

2020 is the year devoted to large-scale sculputers made with colored plastic wires.